Drupal 8 to Drupal 9 made easier 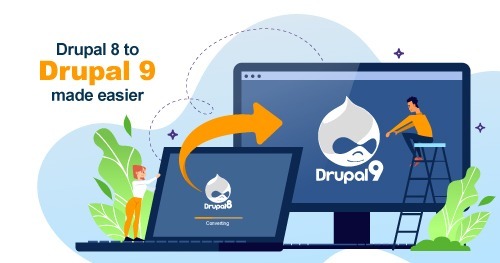 Drupal 8 to Drupal 9 made easier

Drupal 9 was launched on 3rd June 2020. It was a moment of excitement for all Druplers at Innoraft, an organization with 9+ years of legacy in web-development using Drupal CMS.

We were determined to be amongst one of the very first companies in the world to get their hands on to Drupal 9. We did extensive research and in this blog, we will share our experience of migrating a Drupal 8 site to Drupal 9.

Drupal 9 is a cleaned-up version of Drupal 8. Drupal 9 was released alongside Drupal 8.9, long-term support (LTS), which is a minor release of Drupal 8. The only difference between the Drupal 9 and the Drupal 8 LTS is that Drupal 9 is boosted with updated dependencies and removal of deprecated code.

Acquiring the know-how, our team was confident enough to implement D9 in one of our client’s websites flawlessly.

Let us begin with our journey of this migration.

Before starting with the D9 porting we divided the whole update process into 4 parts:

Let us address all of the above pointers one by one.

Updating the contrib/custom modules and themes

We have used the upgrade status module ( https://www.drupal.org/project/upgrade_status ) which basically helped us in identifying the deprecated codes in contrib/custom modules and theme.

( Make sure to install the latest stable version of the module )

This was the crucial part of the update process as we were heavily dependent on the contrib modules and some of the modules were not having the D9 compatibility. However, thanks to the Drupal Community for the patches that were there to support the Module in D9.

The upgrade status module helped us in pointing out some of the deprecated codes that were getting used in custom modules and themes. Few of them were very common, for example, the use of path.alias_manager service

Use of entityManager instead of entityTypeManager function.

Please check below for the list of tools, modules, and references that can be used to identify the deprecated codes in the modules or theme.

Deprecation checking and correction tools to prepare for Drupal 9

While updating the modules we found that some of the modules were not having the Drupal 9 support but as mentioned above thanks to the community for the patches.

This was a critical, time-consuming, and crucial part of the update based on the size of the website and the number of modules that we were using.
The two modules in which we got stuck were the devel and drupal console. If you’re using these modules then you might get into trouble because of their dependency on the Symfony packages while doing an update to D9.

In our case, we were not using these modules so we removed them from the code base and proceeded with the update.

Updating the Core to Drupal 9

Before updating the core to Drupal 9 we made sure that we updated our Drupal Core to the most recent version ( In our case it was 8.9.0 ).

Perform the following steps from your Drupal 8 site's root (where composer.json lives).

# If you have drupal/core-dev installed.

(In your case, make sure you replace 9.0.0 and 8.9.0 to whatever versions you are using in your installation)

Finally, we managed to update the site into Drupal 9 and we totally agree with Dries that D9 is the easiest upgrade ever.

I don’t know if the morning will be sunny or not tomorrow but a lot more peaceful and satisfying for sure :) Let us know in comments if you have any specific questions.

continue reading
What do you think about this Drupal thoughts? Spread knowledge.